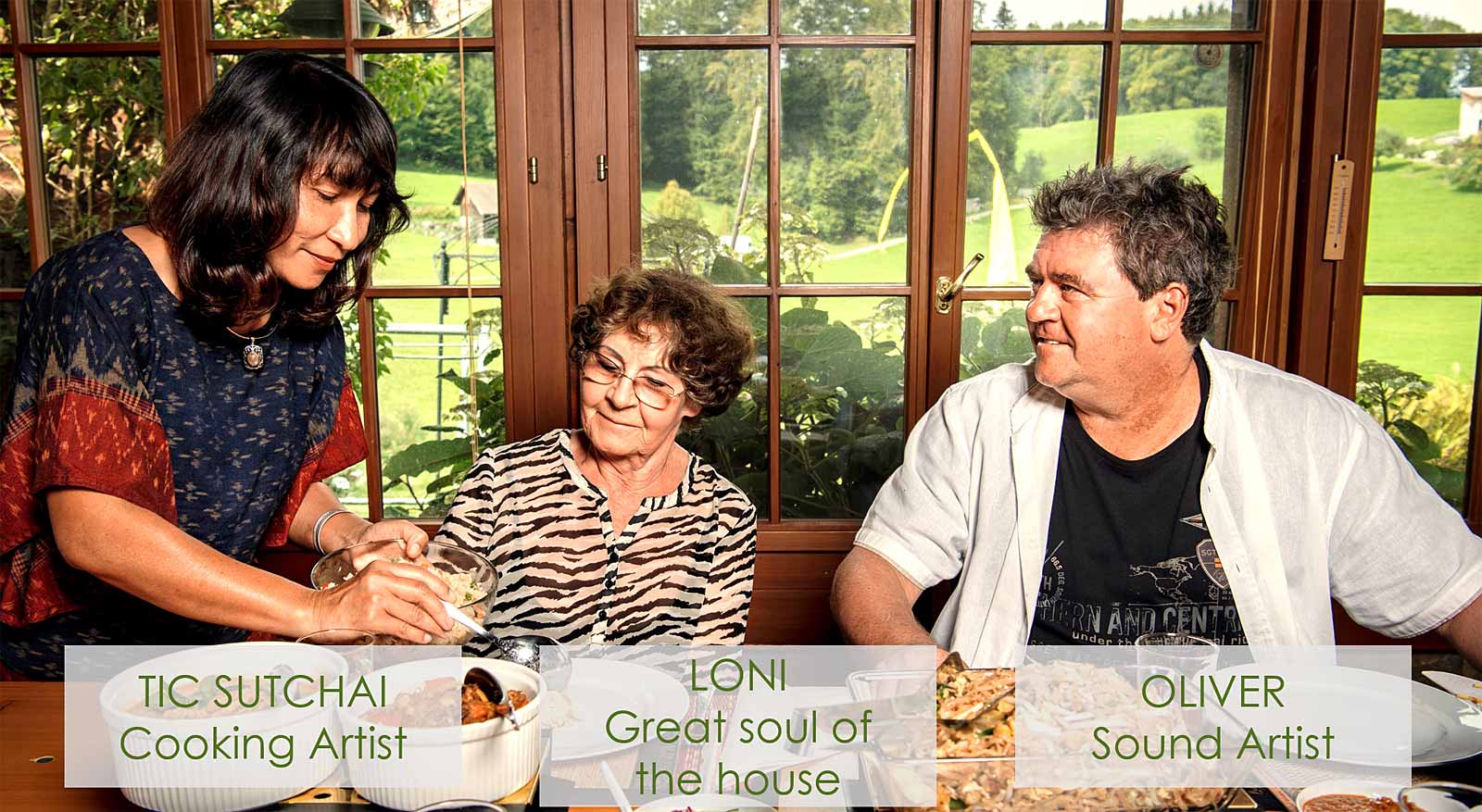 Where the road ends for some,
that's where my creativity usually just starts!
A guiding principle that has accompanied me all my life!
In 1993 I first had the spontaneous idea to use an old rotten tree from my region to make a musical instrument from it. Over the years, more and more art and sound objects have been created in this way. More and more people began to inform me when trees had to be felled.
The last two Sequoia trees, I have to admit, turned out to be a bit big and it took a lot of courage to put them behind my house, but it was worth it. They are contemporary witnesses and also symbols of the power of nature. I "had to" help these old giants back on their feet!
Many people enthusiastically helped to get them up, some looked on in bewilderment and wondered what this was all about. A few people would have loved to cut them down for the second time! But the trees and I survived this resistance and they are still standing today and do not move, at most in the wind.
Instead they move people's minds, and that is exactly what my job as an artist...... Art moves, art must move!
I hope that you too are moved when you look at the pictures on these pages. Then it was worthwhile to remove all the stones from the way and instead look for creative solutions.
Because even the stones that are put in your way can be used to build something beautiful......
In this spirit...... Sincerely yours Oliver Lüttin

Stages in the life of Oliver Lüttin
Extract from the impuls-holz-sg 2007 project competition
As can be seen from the explanations below, the biography of Oliver Lüttin is by no means straightforward. Like a gnarled tree there are twists and turns and knotholes, crevices and cracks. But the fruits of such a tree do not taste any worse than those of a tree that has just been cultivated.
Oliver Lüttin was born on  May 3rd 1966 in St.Gallen. He spent his early youth in Teufen/AR. Neither the piano playing prescribed by his parents nor the school did appeal to him. The bricklayer apprenticeship was preceded by leaving school at the age of 16. His subsequent work as a foreman in building construction and additional training as a potter and paver laid the foundation for the many and varied craftsmanship skills from which he would later benefit to a great extent.
During his time as a craftsman, all-rounder in the service of others, he was also permanently active artistically in the fields of fine arts and painting.
1985 - 1988 Working with stone (sculptures)
It was only during his six-month stay in Australia that he first came into contact with wood as a material for instruments. He learned how to build and play the Australian original instrument, the didgeridoo. After his return he worked with the Rigolo Theater Wattwil and was active as a course instructor for instrument making (including Migros club schools). Lüttin used his free time for experimental building and sound experimenting with wood.
1993 - 1994 Whale Tree from maple
The construction of the first tree instrument was accompanied by a large number of tool developments. Nowhere were the necessary working tools to work on trees for the purpose of making them sound. So Lüttin decided without further ado to develop the tools step by step on his own.
1998 Förderpreis (Award) Appenzell Ausserrhoden. At the same time as the first award for his work with exclusively regionally grown woods in the field of sculpture and instrument making came up, the first media became aware of Oliver Lüttin's work (e.g. reports in the Tagesschau Fernsehen DRS, Swiss TV).
1999 Purchase of the farmhouse in Degersheim on Wolfensbergstrasse
Since the time of buying a house in Degersheim, Lüttin has been able to put down roots. Initially, he was occupied with the ongoing, personal reconstruction and extension (living area and sound studio). In meantime, a large collection of instruments with prayer tree, mammoth drums, etc. has been created. As a result, the first public performances became possible. Musicians became aware of Lüttin's work and activities. The first stage programmes are created.
2003 Stage programme with the title Kreiswelten
Together with the Appenzell musician Fredi Zuberbühler, Treetalks is now also present with a full evening stage programme. Even if the logistical effort is considerable, the acoustic-spherical sound experience Kreiswelten makes it possible to get to the interested people in theatre halls and village stages.
2005 Stage programme with the title TreeO
A second stage programme with the fellow performers Fredi Zuberbühler (dulcimer) and Beat Föllmi (percussion) will make it possible to cover a further spectrum of tree instruments, including popular music.
For years Oliver Lüttin has not only been active in instrument making and for concerts, but also offers workshops at schools and courses in the sound studio in Degersheim. More and more often, work in the sound therapy sector with workshops, hospitals and homes is added to this. Oliver Lüttin has also been invited as a speaker and show act in team building seminars for companies and executives. This circumstance shows that Lüttins way to his abilities and passion can be symbolic for third parties.