Walk-in Instruments as Vision and Dream
The Cosmic Octave and the Four Elements as Sound Architecture
Unique archaic Sound Temples as a Life's Work
In his search for connection with creation, nature and the desire to enter into symbiosis with it, Oliver Lüttin discovered elementary, geometric as well as mathematical structures, which are present in creation. This led to the vision of expressing this in walk-in instruments and sculptures.

In all cultures, the tree has always been the symbol of life energy, of balance, the symbol of life and death, the connecting element par excellence. Since time immemorial, human life energy has been expressed in the form of dance and music.
The walk-in and all other instruments of Treetalks symbolize this connection between man and nature. The work on the instruments consists in transforming an old tree into a sounding instrument (transformation). The old and rotten heartwood is peeled out and replaced by vibration.
The variety of character of the trees plays an essential role in the choice of the resulting instrument. The instrument is thus already contained in the tree beforehand. It is understood as such and made into what it already is.
The form, color and beauty are retained to emphasize nature as a harmonious architect and evolutionary structural engineer.
As a matter of principle, no healthy trees have been or will be felled for the production of all instruments and sculptures. Even from the heartwood, large butterflies are made if possible (see pictures HERE)

In the individual descriptions of the walk-in instruments, the vision of the individual work is explained in detail.
The Cosmic Octave and the Four Elements
Over a period of ten years (1998-2008), Treetalks worked on the realization of five walk-in instruments.
The Cosmic Octave
The Elm - Primordial Mother of Humanity (The Cosmic Tree)
Original location: St. Leonhardskirche St.Gallen
Start of the work in 1999 on the Treetalks site, Degersheim
The elm as a cosmic octave could unfortunately not be completed and is no longer present on the site today.
The elm as a cosmic octave, a lasting vision

In the middle of a water lily pond surrounded by baroque stones is a walk-in elm. In it the cosmic octave resounds. Seven natural openings and brass tubes allow the seven tones to emerge. The brass tubes are struck with a mallet, while the openings can be closed with Tiffany glasses.
The representations in the glasses represent the seven heavenly bodies, which are the basis for the cosmic octave. The door for the entrance into the elm represents the 1st opening, Saturn - guardian of the threshold. The other six openings are each assigned to a planet according to their size, these are Moon, Mercury, Venus, Mars, Jupiter and Sun. The seven openings represent the nearest stars of the earth. Due to the solar radiation through the cut glasses in the openings, the inside of the elm gives the impression of a starry sky.
The ratios of the orbits of the celestial bodies reflect the oscillation ratios of the individual tones of the octave. Inside the tree a fascinating light atmosphere shines through the colored glasses, which changes depending on the position of the sun. At night the elm is illuminated through the water. The play of the water is reflected on the tree trunk - a reflection of the cosmos.
The elm originally stood near the St.Leonhardskirche in St.Gallen. A wind crack has led to the fear that the tree could fall onto the tracks of the SBB. 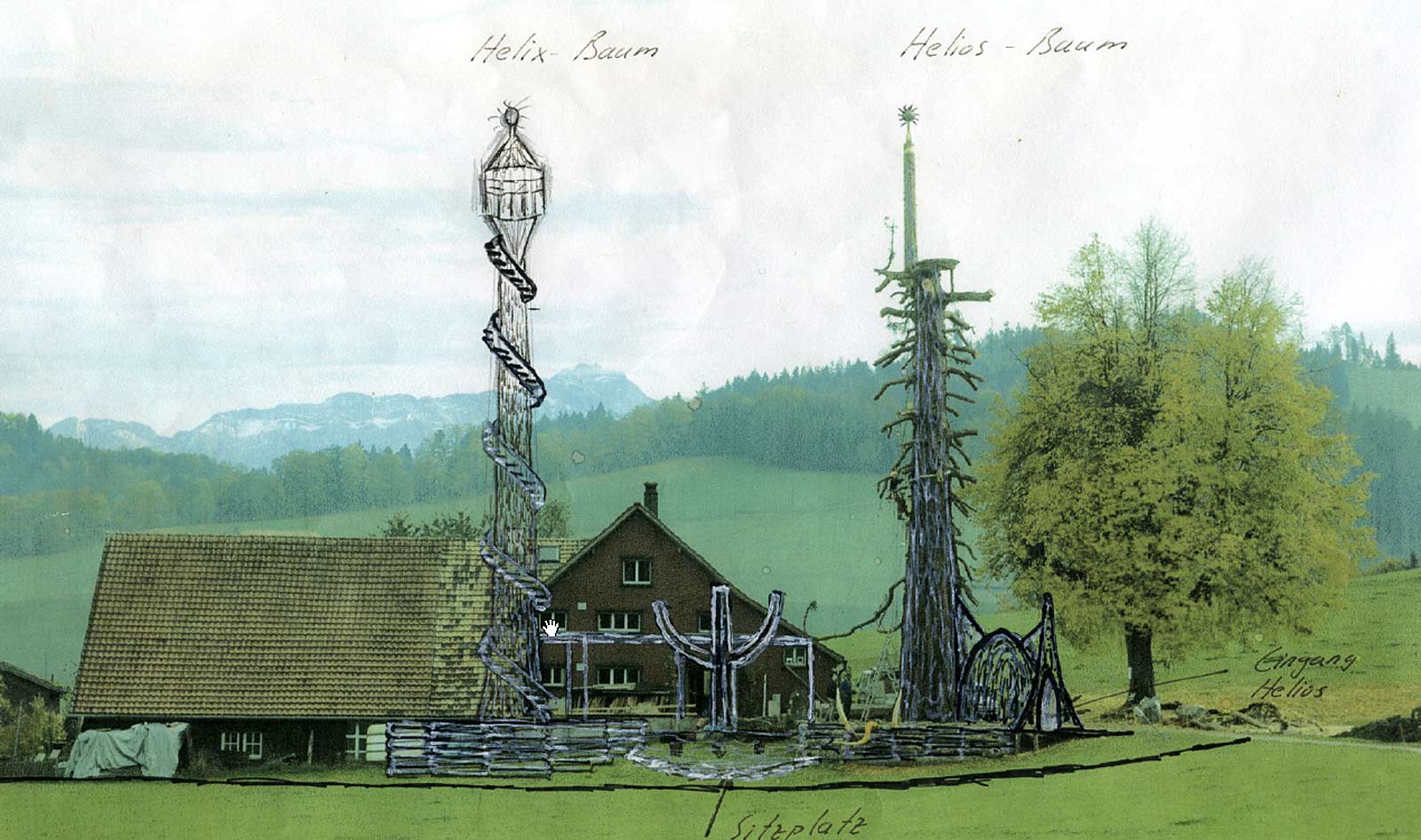 Helios – Element Water, female
Giant sequoia (Sequoiadendron giganteum)
Original location: Helios nursing home (Greek sun god), Goldach
Transport to the Treetalks site, Degersheim on 5 October 2005
Since 2012 the walk-in Helios is a temple that can be visited.
A bridge leads to an antechamber of shingles in the shape of a Sequoia cone. Inside is a documentation of the creation of the work. After the antechamber, one enters the interior of the 21 meter high sequoia.
In the center of the tree there is a shaft, which in turn, connected to other shafts, houses the spring water system of the Wolfensberg. Thus the rushing of the water is to be heard constantly, one imagines oneself in a stalactite cave. The channel connections also make it possible to transport sounds.
This creates an analogy to capillarity as a tree function. A Sequoiadendron giganteum (sequoia) transports vast amounts of water from the ground to the crown. The cycle of water and function is closed.
When viewed from the outside, the crowning tip of the sun made of copper catches the eye. It provides information about the name of the work, which comes from its original location in the garden of the Helios (Greek sun god) nursing home in Goldach.
The Helios tree is accessible to visitors from the inside. Various "offers" have been created for birds and to animate the tree. Thus a stork's nest and other nesting places decorate the tree trunk.
The Helios was felled on October 5, 2005 due to the extension of the Helios nursing home, Goldach.

A connection between the Helios tree and the Helix sculpture should be created, which serves as a stage for the people (music, theater, performance etc.).
The Helix tree was attacked by the Halimash fungus at its original location, it fell victim to the heat summer of 2003.

Drum Tree – Element Fire
Giant sequoia (Sequoiadendron giganteum)
Original location: Casino Konstanz
Transport to the Treetalks site, Degersheim in spring 2007
One of the 26 drums is located in the Klangarena and is playable
The genus Sequoiadendron (sequoia) was probably named after the Cherokee Indian Sequoyah, who developed the syllable writing for the Cherokee language in the early 19th century. The Indian tribes of North America used large drums for their Sun Dances, among other things with the purpose of "massaging" the surface of Mother Earth.

The common play on the drums connects the people.
The large drums were made from a Sequoiadendron giganteum (sequoia) from Konstanz, Germany, which was sawed into 26 pieces. The almost 27 tonne tree was hollowed out and 26 large drums with animal skins from Switzerland were created.
Originally the idea was to make these drums available to schools through sponsors and to bring these giant instruments together once a year at a mammoth festival and play them.

The Project-Idea 2008
In the Alpeinstein massif, mostly buried in the earth, lies a huge fossil.
This ammonite (known as Nautilus shell) was formed millions of years ago and was pushed up during the tectonic formation of the alpine massif. The discovery of this fossil was the catalyst for another vision of a walkable stone instrument.
Visitors enter a three-dimensional, walk-in instrument. The human being is thus inside the resonating body. From the entrance to the interior of the Nautilus, a path leads past thousands of taut strings tuned to the planetary tones (earth, sun, moon, etc.).
The strings are played (continuously...) by humans and the earth sound grows out of the earth.
This giant instrument has the unique property that it never needs to be tuned, but remains in harmony by itself. The problem of all stringed instruments out of tune is solved in a unique way, namely by the skilful application of weights. By means of a system of pulleys, identical counterweights weighing several tons keep the instrument in balance.
The principle of the weights is made tangible, and the weights can also be another instrument in the form of a carillon.
By moving the string bars, the entire sound can be changed as required.
The soundboards are placed in the middle of the passage. On one side you can (play) inside the ammonite, on the other side you can (sound) outside.
The center can be used for recordings, concerts or exhibitions. A glass dome provides sunlight.
The instrument should be completely integrated into the landscape by its natural form. With the idea of sound shafts, the sounds should be carried from the inside to the outside. 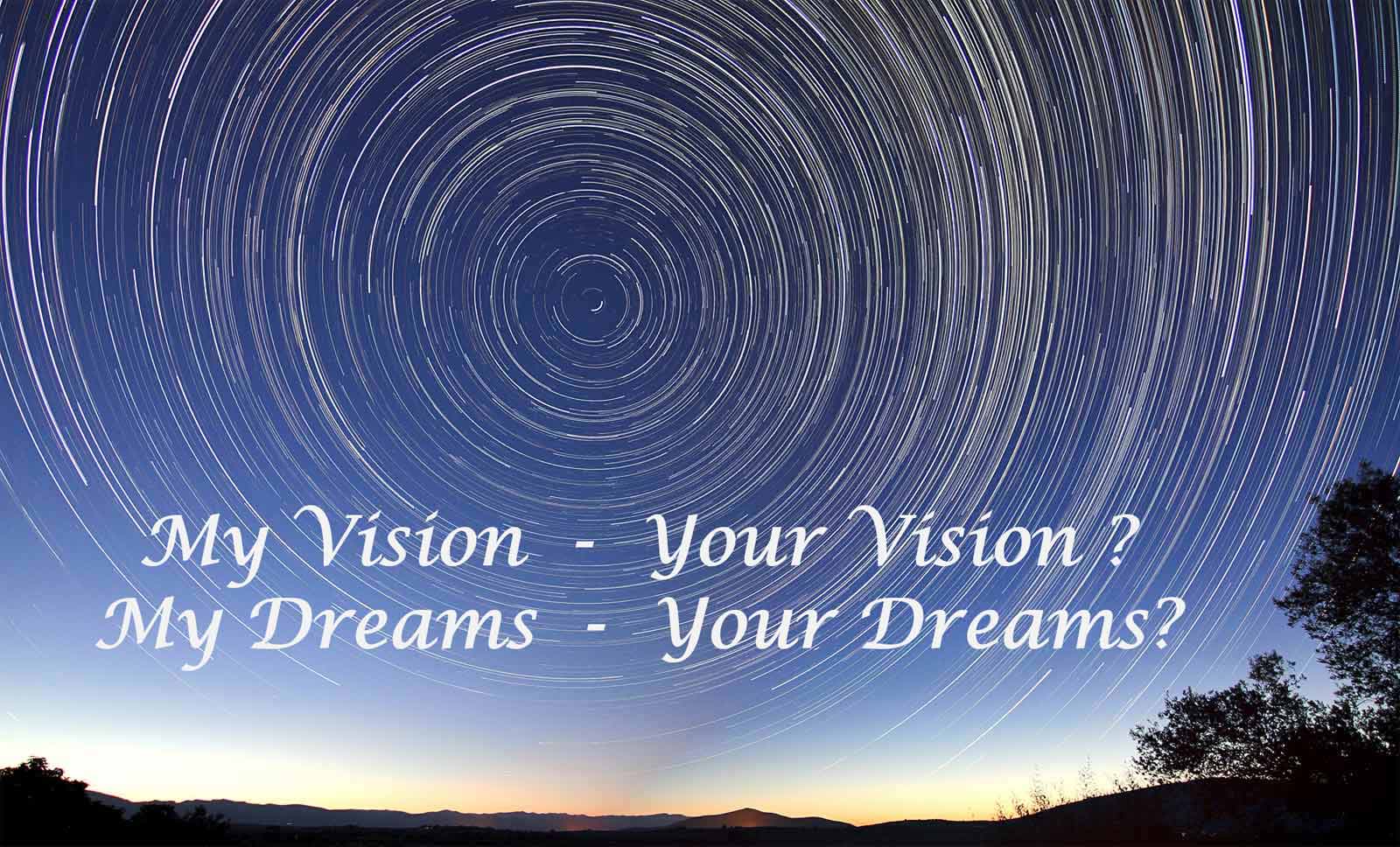